In the climate of the Vietnamese Reunification Day, April 30th, Vietnamese citizens will celebrate this day and recollect memory the heroic past. Not only Vietnam is famous for beautiful landscape, hospitable locals and delicious food, this country also attracts foreigners who are historical fan. Is Vietnam still Communist?

Is Vietnam still a Communist Country?

Technically, Vietnam until this day is still a communist country having the one-party rule, that is the Communist Party of Vietnam, under Marxist-Leninist governance. Together with China, Laos, Cuba and, to a large extent, North Korea, Vietnam is the remaining communist countries today.

However, Vietnam, like other communist countries, has to adopt some capitalist principles to survive. Vietnam, as a matter of fact, since implementing a series of free-market reforms in the mid-1980s, has now become one of the world’s fastest-growing economies and has set its goals on becoming a modern and industrialized nation by 2020. 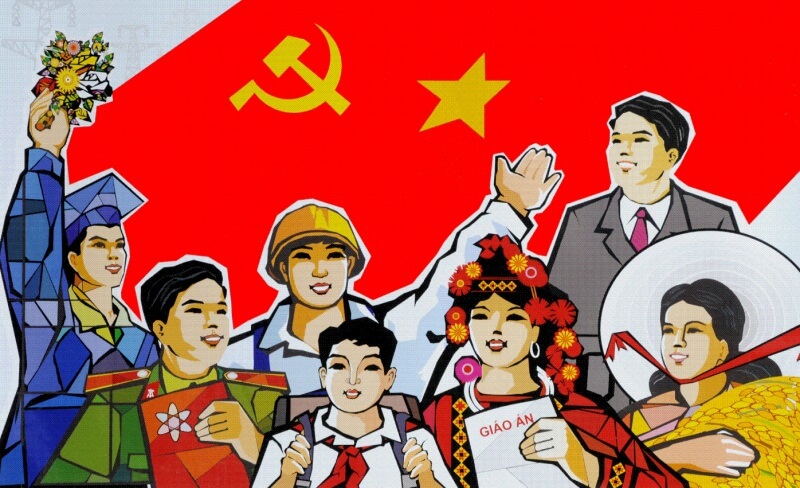 What caused Communism in Vietnam?

Vietnam is a small country but in the past, it had to suffer the Juggernaut of war. In 1930, Ho Chi Minh, under the name of Nguyen Ai Quoc, went to Hong Kong to unite all the 3 parties into the Vietnamese Communist Party, which was later renamed to Indochinese Communist Party. On May 19, 1941, he formed the League for the Independence of Vietnam (abbreviated to Viet Minh Front) at Pac Bo. The Viet Minh was dominated by the Communist Party although it was supposed to be an umbrella group for all parties fighting for Vietnam’s independence.

In a power struggle in 1945, the Viet Minh purged and killed members of rival groups, such as the leader of the Constitutional Party, the head of the Party for Independence, some Trotskyists and Ngo Dinh Diem’s brother, Ngo Dinh Khoi. In July 1946, hundreds of political opponents, notable members of the Nationalist Party of Greater Vietnam, were jailed or exiled after a failed attempt to raise a coup against the Viet Minh Government. In the same year, when Ho Chi Minh traveled abroad, his subordinates jailed around 2,500 non-communist nationalists and forced 6,000 others to flee. All rival political parties were hereafter banned and local governments were purged to minimize opposition later on. The communists eventually suppressed all non-communist parties. North Vietnam became a single-party state under communist rule since then. 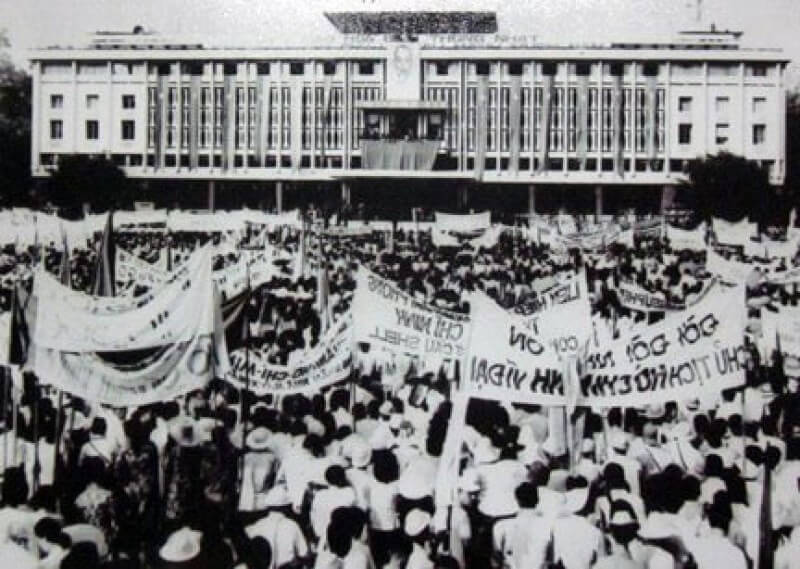 Following three decades of bitter wars, Vietnam was reunified under the communist rule after the North communist forces seized Saigon on April 30, 1975. Vietnam officially became a communist country on July 2, 1976.

April 30 became an anniversary that marked by several festivals around the date and it is called Reunification Day, Victory Day or Liberation Day or the official name of Day of liberating the South for national reunification. This public holiday in Vietnam marks the event when North Vietnamese and Việt Cộng forces captured Saigon(now called Ho Chi Minh City) on April 30, 1975. This signaled the end of the Vietnam War, known in Vietnamese as “Resistance War Against American invasion”. It was the start of the transition period toward reunification, which occurred in the national election for national reunification on July 2, 1976, when the Provisional Revolutionary Government of the Republic of South Vietnam and the Democratic Republic of Vietnam merged, forming the modern-day Socialist Republic of Vietnam. 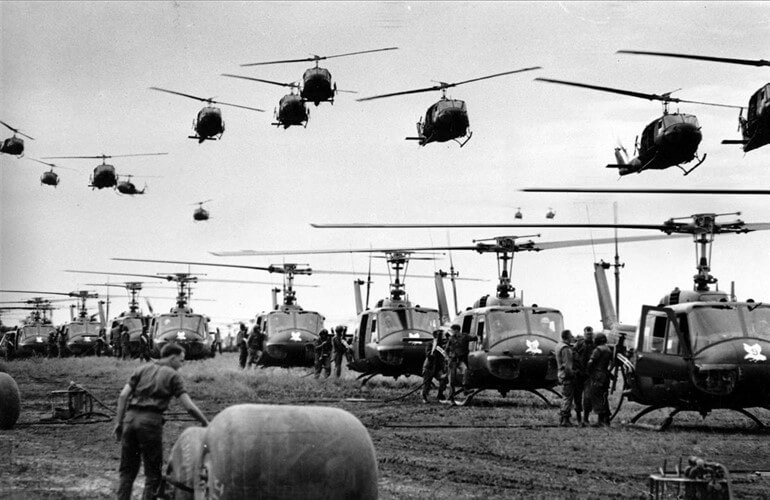 Yet even as the now-united country trumpets the North’s victory over American invaders during a devastating conflict that left more than 3 million Vietnamese and nearly 60,000 American troops dead, bitter rifts over the civil war remain deep and unresolved. 44 years later from Reunification Day, Vietnam still deeply divided over the war.

For the first ten years as a communist country, Vietnam stayed true to the principles of Marxist-Leninist. Both its government and economy were strictly central-controlled. People were put to work under government programs after massive campaigns of collectivization of farms and factories were conducted. Wars’ destruction, inefficient programs, and policies, as well as political isolation, pushed Vietnam into an economic crisis. A decade after unification Vietnam still remained impoverished. 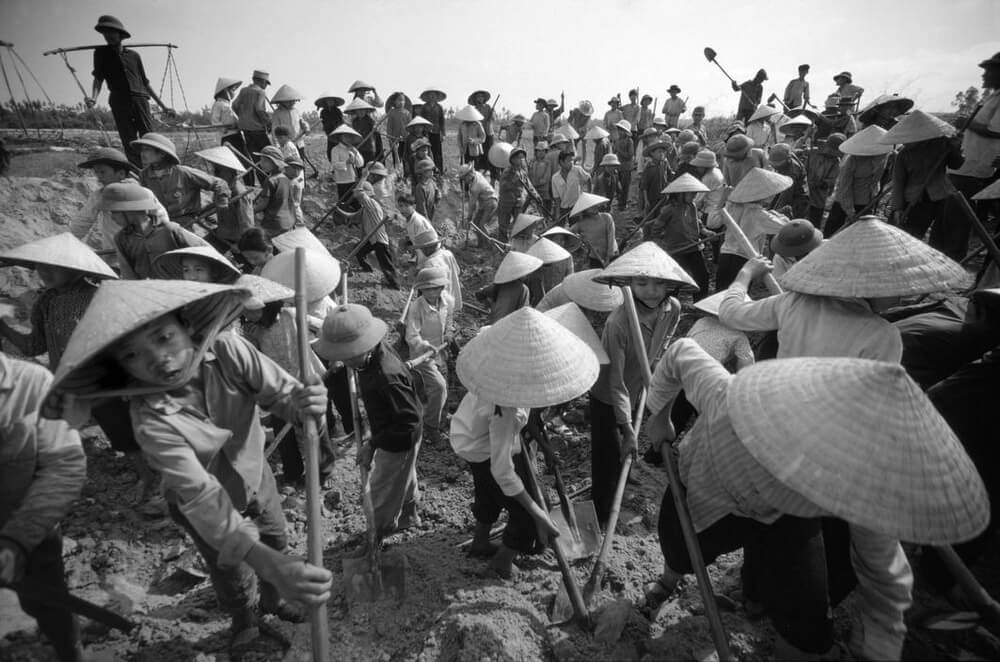 A historic shift came in 1986 when Vietnamese government introduced a series of economic and political reforms best known as “Doi Moi” (Renovation) in an attempt to revive the economy that had been hindered by three decades of war and another decade of economic crisis. Renovation policies shifted the planned centralized economy to the so-called “socialist-oriented market economy” – a multi-sectoral market economy based on state-owned industry. Private enterprise, decontrol, and foreign investment were now highly encouraged.

Thanks to Renovation, Vietnam has seen rapid economic growth in various fields from agriculture, construction to exports and investment with average annual GDP growth of roughly 7% up to the global financial crisis in 2008 and remained more than 5% since 2010, making Vietnam one of the world’s fastest-growing economies. The economic reforms, together with rapid and significant growth, earned Vietnam a place in the World Trade Organization in January 2007, after 12 years of negotiations. Before that, Vietnam has also established diplomatic relations with all countries by 2000. 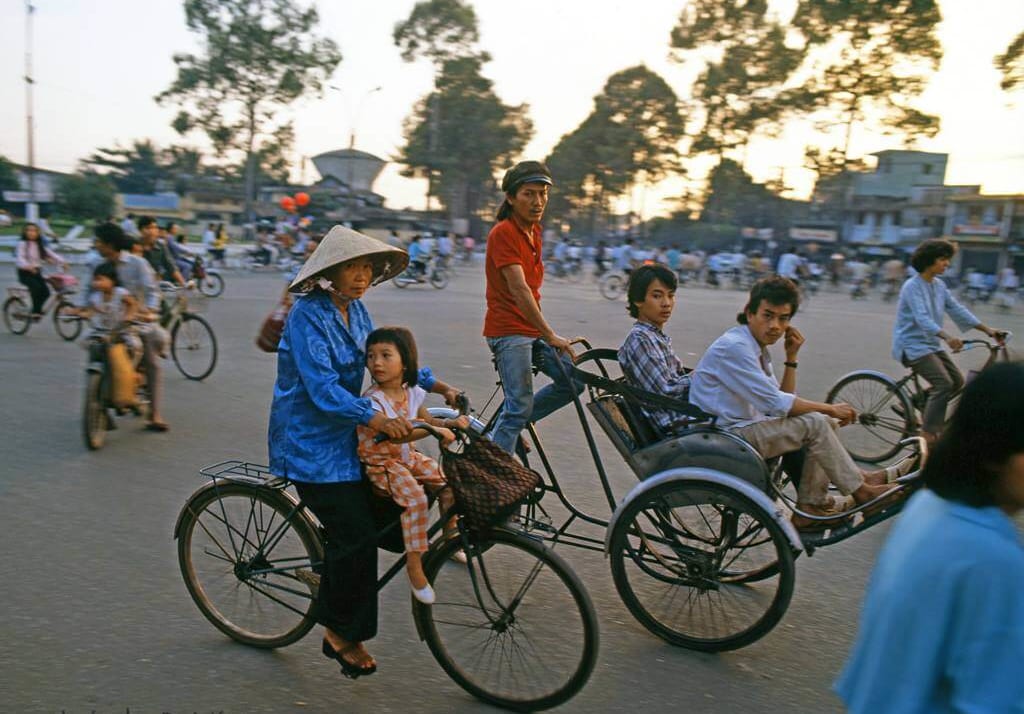 Based on what is happening, one could now argue Vietnam is no longer a purely communist country. Having said that, Vietnamese people do have freedoms in a number of ways including the free market system mentioned above. Vietnamese citizens are now able to start their own businesses as well as purchase goods from other privately owned businesses instead of going through a state-owned company as last time. The number of internet users also rises significantly to 49 million in 2016, which is 52% of its population.

Even though it sounds odd with only one political party, non-party members and non-partisans are allowed to participate in local elections and could possibly gain a seat in the National Assembly. In the 2011 election, out of the 500 seats available in the Parliament, 42 seats were won by independents and non-communist party members, as opposed to the 2007 election where there were only 493 seats available and 100% of those, were won by the Communist Party candidates.

After all, the ruling communist party shows little willingness to give up its monopoly on political power. Its central role over all organs of government remains unchallenged and there is little sign that real democracy is coming to Vietnam anytime soon.

The Communists may have won the war, but the capitalists have won this cosmopolitan city that buzzes with entrepreneurial energy. Ho Chi Minh – the bustling city of 8 million that is still called Saigon is crowded with people studying and working. Young Vietnamese are as a selfie- and Facebook-obsessed as peers around the world, and their focus is on how to take advantage of a growing economy, they pay more attention to the economy than political issues.

Entry Requirements: You must have a valid passport and a visa (or pre-approval for a visa on arrival) to enter Vietnam. Your passport must be valid for six months beyond your planned stay, and you must have at least one blank visa page. Visit the Embassy of Vietnam website for the most current information.

One Reply to “Is Vietnam one of countries remaining communism in the world?”

Citizens from 80 countries will be allowed to get an e-visa from July 1, the government said in a resolution signed on Monday. The 79/NQ-CP…

As a citizen of Gabon, you are kindly advised to have Vietnam Visa to enter Vietnam. This article will help you with many ways to…

As a citizen of Congo, you are kindly advised to have Vietnam Visa to enter Vietnam. This article will help you with many ways to…

As a citizen of Botswana, you are kindly advised to have Vietnam Visa to enter Vietnam. This article will help you with many ways to…

As a citizen of Gibraltar, you are kindly advised to have Vietnam Visa to enter Vietnam. This article will help you with many ways to…

As a citizen of Andorra, you are kindly advised to have Vietnam Visa to enter Vietnam. This article will help you with many ways to…

Do you know how to get Vietnam visa on arrival from Bermuda? If not, do not worry, we will show you all information you need…

British citizen Gavin Wheeldon has been held in a Vietnamese government quarantine near Hanoi since March 14. Here he provides an insight on what day-to-day…